A ton of NFTs are on sale right now from the recent dilemma with the liquidation of the APE DAO. The inventory of the DAO includes premium assets such as 81 Bored Apes Yacht Club, 81 Mutant Ape Yacht Club, and 34 Bored Ape Kennel Club NFTs. How we got to this moment is a really interesting story that I wanted to tell today, so let’s back up a bit first.

What is the Ape DAO?

The Ape Dao is a Decentralized Autonomous Organization (DAO) originally setup to hold the Bored Apes held by Kylo.eth. He fractionalized 49 Bored Apes and a female CryptoPunk into 1,000,000 APED tokens on Niftex on 3rd June 2021.This allowed anyone to have part ownership in those tokens by purchasing APED tokens. The DAO stated the following: “The complete bundle was valued at 140 ETH and 50% tokens were sold to generate 70 ETH, which Kylo then donated to the DAO as initial funds for more purchases“.

According to an excellent twitter thread from Montana Wong, who claims they are no longer involved with Ape Dao, there has been a price mismatch between the APED tokens and the value of the underlying portfolio of NFT assets that the APE DAO holds. When the proposal to liquidate the DAO first surfaced around 31 January 2022, the price mismatch data looked like this (this data has not been independently verified, and is sourced from the twitter thread):

To take advantage of this price-mismatch, a user submitted a proposal to the DAO , to liquidate the DAO’s holdings, and return the proceeds to APED token holders. The vote on this proposal tightened but then eventually passed:

The story of APE DAO is also a very personal one for many people. I spoke with a member of the APE DAO who wishes to remain anonymous (let’s say this source is a he, just for convenience). He bought into the APED token in July, 2021 just before Bored Ape’s meteoric rise.

He joined the DAO with a two friends, and it was his first and only DAO that they were involved with. He also said:

I think Yuga Labs will continue to increase in value over the long term. I liked the community too and I thought over time we could create some revenue deals with having so many BAYC that we could actually trade at a premium with income coming in.

But he was also understanding of the successful vote to close the DAO, he too was underwater on his investment:

The discount was so large, I was underwater from the price of APED up until the end. Even though NAV had risen.
That was part of why ppl voted to liquidate, they couldn’t get out at a decent price.
I was focused on the long term, so it didn’t matter to me.

Since the vote to liquidate passed, the DAO then proceeded to begin liquidations on their holdings, deciding to first sell the non-Yuga Labs NFTs. According to their Discord, a bunch of NFTs are going to go on auction soon, and the Apes and premium NFTs are going to hit the market in bundles, perhaps grouped by traits.

If you’re going to try and participate in these auctions, so far they are being managed in a somewhat non-traditional fashion, using Google forms for bids, and Google worksheets to list the assets. Do your own due diligence, and always exercise extreme caution dealing with anyone on Discord.

I had a chance to chat with Kylo.eth and validate some of the key facts for this story, and he also told me that: “There’s a possibility that the Yuga Labs NFTs are sold to a buyer/group of buyers if they come with the right offer“. He also voted against dissolving the DAO.

There May Also be Value in the APED Token Itself

As of press time, the APED token on Uniswap appears to be trading in the $15.00 range, and valuation data from their Discord, updated on February 6th 2022, shows potential value still remains in the token (this data has not been independently verified). 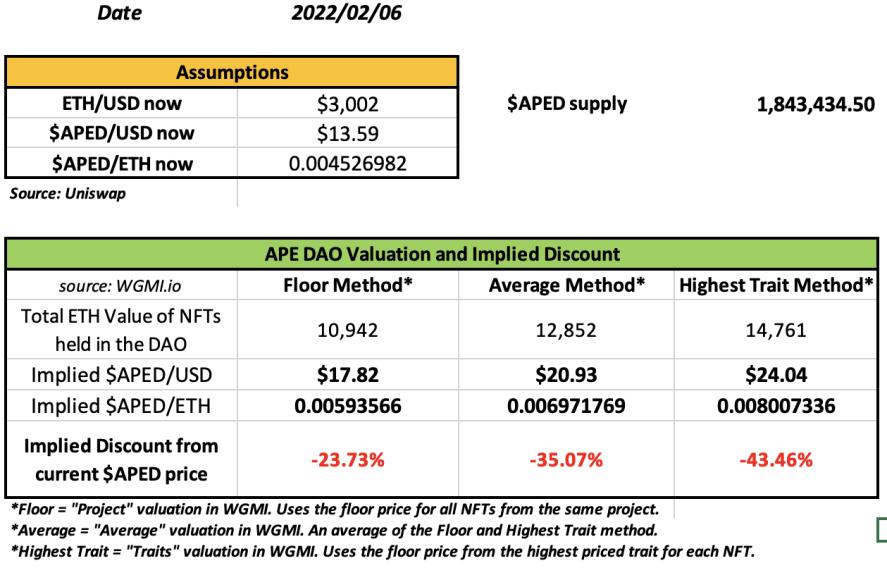 It’s definitely a volatile situation, which is perhaps why the current swap prices have shot up compared to a few weeks ago, but do not appear to realize a fully liquidated portfolio. Similar situations can appear in equities markets, when a company announces the intention to acquire another company.

There is a period of time where due diligence has to be completed, the deal terms have to be looked at by the shareholders of both companies, and then eventually a vote of the shareholders often takes place. This causes a period of time where the public stock will often trade for alower price than the stated acquisition price, because there is still risk to the deal actually closing.

This is not financial advice, I just thought it was a really interesting scenario unfolding!

PrevPreviousUbisoft’s Raving Rabbids Invade The Sandbox
NextWhat’s on Guide to the Metaverse – February 11th-13th, 2022Next