RavenQuest is a free, play-to-earn fantasy MMORPG with a nostalgic artistic aesthetic. With a luscious and highly detailed open world that has been developed over the past five years, players can engage in an immersive and ever-changing world filled with lore, puzzles and player autonomy.

With a strong player-driven economy which uses self-balancing algorithms at its core, passive income is a fundamental utility of Raven Quest, and is facilitated by the game’s upcoming Land sale.

The RavenQuest Land Sale will take place on June 5th. Upon minting, the Land can be used to build houses on, as well as to engage in workmen tasks such as Husbandry, Woodcutting and many other activities. Here, resources can be gathered, which can then be used to craft and sell Tradepacks.

Each Land will also come with a list of in-depth metrics which determine its productivity and value. These metrics include Product Tiles, Rooms, Perks, Worker Beds, Stamina Recharding, and Durability Recharging. The number of Lands are limited, and they can only be obtained through the fixed supply of the Land Sale, or alternatively, with a certain amount of $SBT on a secondary marketplace.

There are five sizes of land available for purchase, Small ($60), Medium ($300), Large Estates ($1,500), as well as Strongholds ($7,500) and Forts ($30,000). The purchase of any Land plot will also be accompanied by climate-conscious initiatives, which range from planting trees to combat deforestation, to relocating tigers to animal sanctuaries. 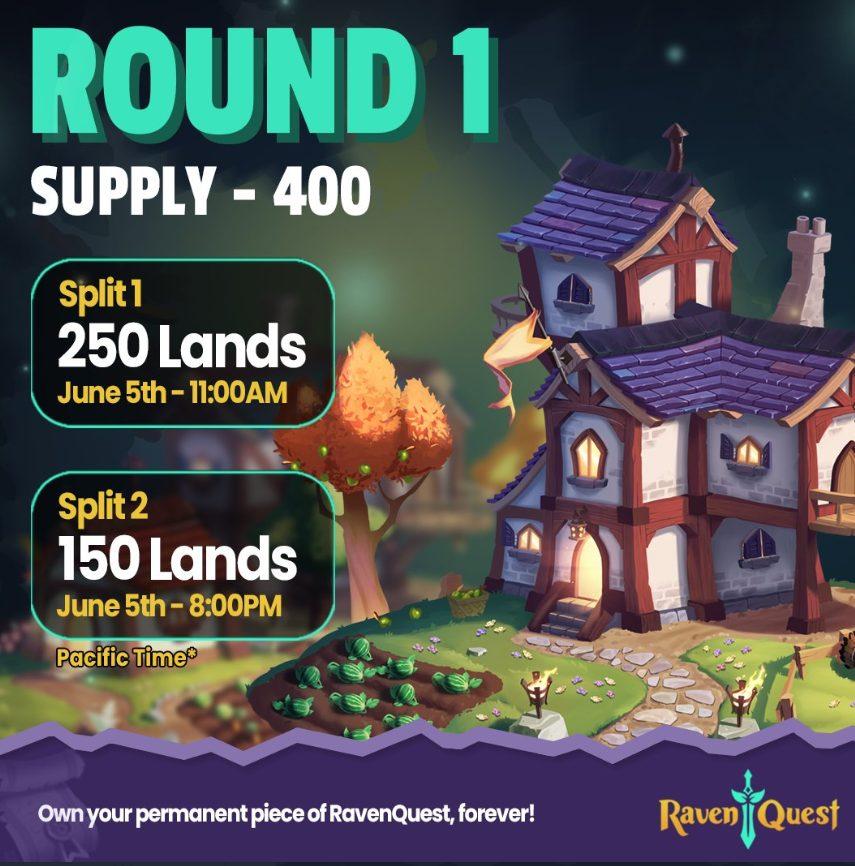 Round 1 (50% discounted Land Sale) will have only 400 pieces of Land available for purchase, which is an incredibly low supply that represents only 1/25th of the project’s total supply. To accommodate for the global user base of the project’s Whitelist, the sale will be split in two, with the first sale (supply of 250) taking place at 11AM PT on June 5th, and the second sale (supply of 150) taking place at 8PM PT on June 5th.

With the total supply of RavenQuest Land being 10k, players can discover the supply information of each type on the project’s website.

Creatures called Moas will live on Lands, and can be bred, collected or traded in order to gain competitive advantages over neighbouring Land plots. There are also over 500,000 unique workers at the player’s disposal to hire (each with different stats), as well as ships and wagons which can be used for navigation.

Players will also be able to collect fully illustrated Ravencards NFTs which can be used to customise their unique character, gather resources to craft weapons, or battle other players with. In doing so, players can engage in Arena Ladder and PvP Tournament battles to earn extra income when victorious.

The game also consults advise from third party experts from fields such as blockchain technology, marketing, strategy, tokenomics, and more.

With all the core stages and four Alpha stages now complete, what remains for RavenQuest is the Final Alpha and Open Beta for final bug discoveries and fixes.

This, of course, includes the Land sale, as well as the development of the Arena System, New Dynamic Tutorial, an IDO, Marketplace and Eternal Release.

At a TBA announced date in the future, staking rounds, token burning, a political system, Arena tournaments, Moa racing, a prehistoric expansion, and a lot more, is expected to enter the mix.

Within the realms of December-based joviality, no yuletide would be complete without an ‘annual ugly sweater competition. So, to cater to this essential Christmas staple, Decentraland will

Playboy Parties Its Way Back to The Sandbox – NFT Plazas

Playboy returns to The Sandbox with its first-ever original NFT drop within the technicolor Metaverse. The NFTs, named, The Playboy Party People take the form of virtual avatars inspired