Welcome to Metaverse Market Analysis! Every Monday we bring you the latest stats and data on the overall state of the metaverse market. This column is in partnership with the incredible team from OneLand, a financial platform for virtual lands in the metaverse.

Meanwhile, Decentraland’s market cap was up for a fifth consecutive week, as it re-establishes its pre-eminence in overall land cap and parcel values, if not trading activity, from its main competitor The Sandbox. Meanwhile, Somnium Space enjoyed a solid pick-me-up, as it refocused on land economics ahead of a quaternary sale event in October.

Trading volume soared 89% in The Sandbox last week, as the project launched new staking pool incentives exclusively for LANDowners. 291.45 ETH passed hands on Thursday and Friday in The Sandbox’s two most heavily traded days for over a month. In what looks a resourceful move, it is nonetheless a bold one, given they will be handing out 3 million $SAND (or $2.58 million on current valuations) in rewards over the next 3 months as part of the plan.

At least on paper though, it offered a big boost to LAND sales, as AlphaSeason3 moved into its second month – sales were up 51% for the week. But unique holders of LAND were down while the top 1% of holders’ increased their LANDs share by 3.7%, raising question marks over whether the effort can broaden their market appeal or simply reinvigorate the existing LANDowners base.

Somnium Spacealso made moves to rejuvenate land sales, announcing its Quaternary Land Offering to run throughout October, with all purchased parcels including the Somnium SpaceWEB WORLDS feature, enabling owners to plug in premade scenes to their land parcels. And the announcement seems to have done the trick, as all major metrics rounded off the last 7 days demonstrably up on recent weeks.

Though percentage moves often appear as an exaggeration for a smaller holder base like Somnium Space, a 1,986% increase in volume does not lie. Despite a bad week for some CUBE holders, with 1.5 million CUBEs compromised in a $160 million hack on market maker Wintermute, the token ended the week up 4.3% while Somnium Space’s land cap rose a healthy 6.6%.

Yet more Estate sales of late, one for 21 ETH, helped Decentraland maintain its momentum of recovering land cap for a 5th consecutive week, up 7.86% to 245,370 ETH, though trading volume (-1.1%) and average prices (-5.2%) ended the week down. Nonetheless, Decentraland has, in fact, been experiencing its best month since the trough of June, with trading volumes, average prices and land cap all on the rise. 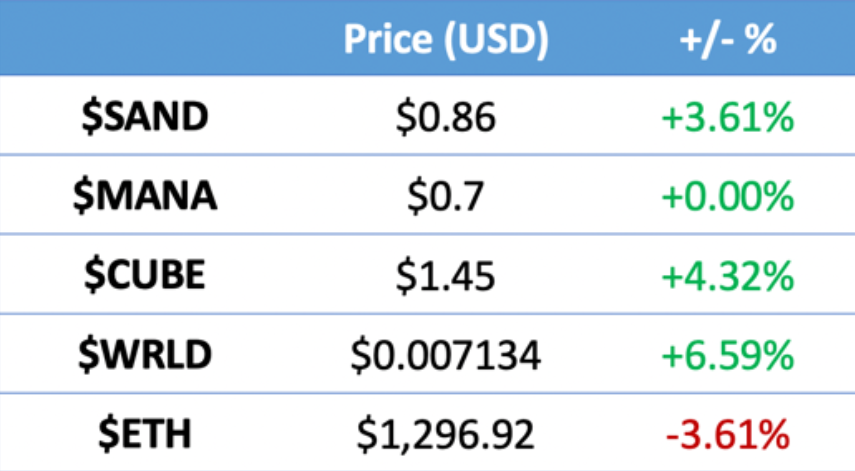 For comprehensive market and metaverse project data, find out more on oneland.world and follow for the latest updates on Twitter.

Stay up to date with the hottest metaverse news >> Here